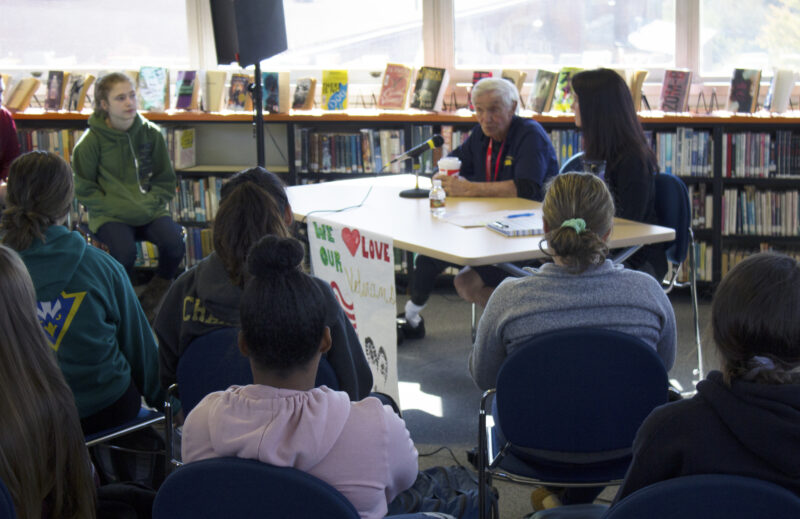 Veterans play an important role in educating younger generations about the principles upon which our country was founded. Tri-County Regional Vocational Technical High School students had the opportunity of going beyond the books to learn about the Vietnam War. Larry Bederian, who served as a Sergeant in the U.S. Marines during the Vietnam War, visited grade 11 English classes to share his story. Born and raised in Franklin and a member of the Franklin VFW, Larry served in Vietnam from 1966 until 1968.

Mr. Bederian told students that he was mistakenly drafted while still in high school during his senior year. He laughs and remembers fondly, “After high school I went to the recruiting office as a joke and ended up enlisting.” He was sent to Camp Lejeune in North Carolina for Basic Training. “We later found out during morning formation that our unit had been activated to go to Vietnam,” said Bederian. “We were given fifteen days leave then we were sent to Camp Pendleton in California where my unit underwent three weeks of intensive combat training. From there, at 3:00 am, my unit was put on a bus to San Diego where we boarded a ship and headed to Okinawa.” They stayed in Okinawa for 2.5 weeks and then were sent to De Nang and became a part of the 1st Battalion Charlie Company.

Mr. Bederian explained to students the differences of how people from around the world live and what he experienced during his time in Vietnam. “We were very disrespected. We didn’t know who we could trust.” Mr. Bederian further reflects, “During Operation Medina, our mission was to clear and destroy. I remember the nights seemed to last forever and it was always spooky beyond our perimeter wires.” He told students about the one night they had set off 122 rockets, when a C-130 was shot down, and of the many frightening North Vietnamese Army patrols. “At night it was just like watching a Fourth of July Fireworks Celebration back home, only these killed.”

“All juniors are required to read The Things They Carriedby Tim O’Brien, which is about so much more than combat experience. It examines the physical and emotional baggage that all soldiers must carry during combat and beyond,” said Lisa LaPlante, English teacher and Coast Guard veteran. “Inviting Mr. Bederian to our school helped students to see and hear the story of a Vietnam veteran and what it was like to serve and actually have lived through it.”

Students were allowed to ask questions and listened to the presentation in earnest. “It is our (all the English teachers) hope that Mr. Bederian’s experiences in Vietnam that he shared have resonated with our students, and they now feel more connected to the characters in the book and can identify, in real life, how the humanity of people is truly impacted by war,” said LaPlante.