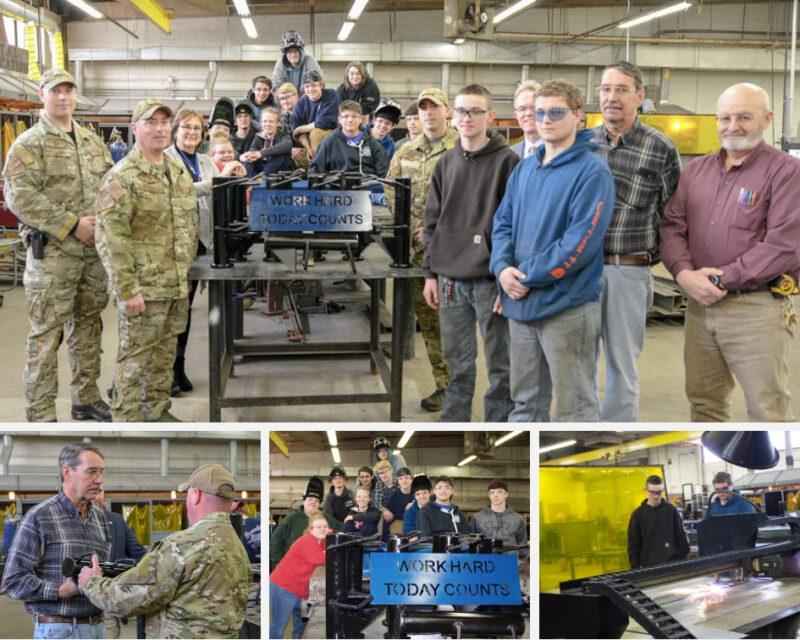 The initial project was to design a lighter and smaller Battering Ram that could be used by a single police officer and could be easily transferred via a police vehicle. Under the direction of Robert Pierangeli, Tri-County Metal Fabrication Instructor, students Robert Corcoran, a senior from North Attleboro and two juniors, Trevor Walsh of Plainville and Bruce Farrand of Wrentham, were asked to work on the project as they are American Welding Society (AWS) Certified Welders.

“We are pleased to have partnered with the Massachusetts State Police to design and fabricate the Battering Rams,” said Cathie Rebelo, Director of Vocational Programs. “This project has given our metal fabrication students valuable hands-on experience in reinforcing their existing skills while working with new technology with the added value of helping the community.”

The students began the project by making an initial prototype according to the specifications and measurements provided. Once it was finished, they sent photos to their contact at the Massachusetts State Police for feedback. Updated specifications were sent back to the students who then made it to the dimensions required including adding special hand guards. The students used a CNC Plasma Cutter to cut the half-inch steel plates for the face of the Ram and quarter-inch steel plates for the back of the Ram to seal it off.  They had to cut out the hand guards to match the type of handles that were needed. Then they tack welded the prototype. Once approved, the students moved forward with producing the Battering Rams.

“The Tri-County School District would like to thank the Massachusetts State Police for providing our students with such a rich and innovative project,” said Stephen Dockray, Superintendent-Director. “We continue to look for opportunities from our state and municipal agencies that will give students the valuable real-world experience in their curriculum.”