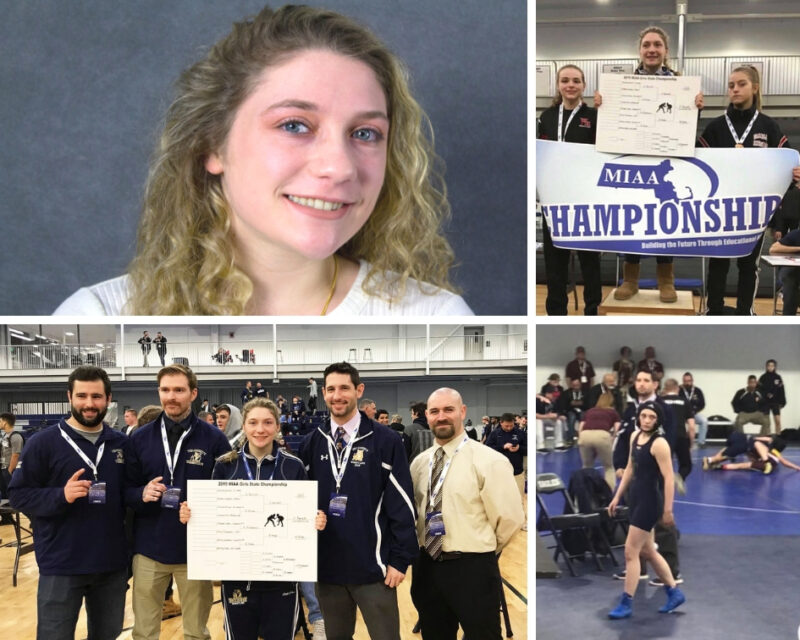 What an amazing season it has been for the Tri-County wrestling team.  One shining star is Ashley Barrett, a senior from Bellingham in the Legal and Protective Services program, who has won the first-ever Girls’ All State Wrestling Championship for all divisions in Massachusetts in the 120-pound weight class. An estimated 70 girls from Massachusetts participated in the inaugural tournament. Ashley won her title by defeating three girls; in fact, she won all of her matches by pin.  Massachusetts is only the 10th state in the country to offer a girls state wrestling tournament.

Ashley is one of two girls on the roster of the Tri-County wrestling team. During the 2018-2019 wrestling season, Ashley wrestled in many mixed-sex tournaments.  She earned second place at the State Vocational Tournament.  She placed fifth at the Cohasset Tournament and she won first place at the Martin Luther King: All Girls Tournament in Mahar.  For her stellar season, the Mayflower League has acknowledged Ashley as a League All-Star and both the Boston Herald and Boston Globe have appointed her an All-Scholastics All-Star.

“Ashley’s hard work has made her extremely coachable and confident,” says Coach Steve LaPlante. “She knew she was going to be a state champion before her finals match even started. She has instilled this confidence in her teammates and coaches.”  Not only did Ashley work hard on the mat every day during the wrestling season, she also put in the work during the offseason. After her junior year, Ashley began attending the Blackstone Wrestling Club in Cumberland, RI.

How does a girl get into wrestling in the first place?  At six years old, Ashley went to a Taekwondo birthday party and instantly fell in love with mixed martial arts.  Though she did not know what it was at the time, she began her training in Brazilian Jiu-Jitsu.  Ashley currently trains six days a week at USMMA in Bellingham, MA, where she trains with professional fighter and Tri-County alumni, Hillary Rose. “My training in mixed martial arts has given me an edge over many who’ve never done it because it gives you fluid motion and flexibility,” explains Barrett.

Girls may feel apprehensive about joining a traditionally all-boys team. They can struggle to feel fully accepted. However, Ashley did not experience that with the Tri-County team. “Once I made the decision to become a part of the wrestling team at Tri-County, I wasn’t treated any differently because I was a girl,” said Barrett. “Coach LaPlante tells everyone who joins the team that they’re now a part of a wrestling family that will make sacrifices for, and rely on, each other.  He tells us it’s larger than just being a member of a team. It’s about being part of something greater than yourself.”

Ashley is now training for her MMA debut in May when she turns 18 years old.   She hopes to become a professional mixed martial artist in the future.

When not working out at the gym, the busy senior works at the Holliston Police Department as a part of her cooperative education at Tri-County.  After graduation, Ashley will attend Bridgewater State University to study Psychology.