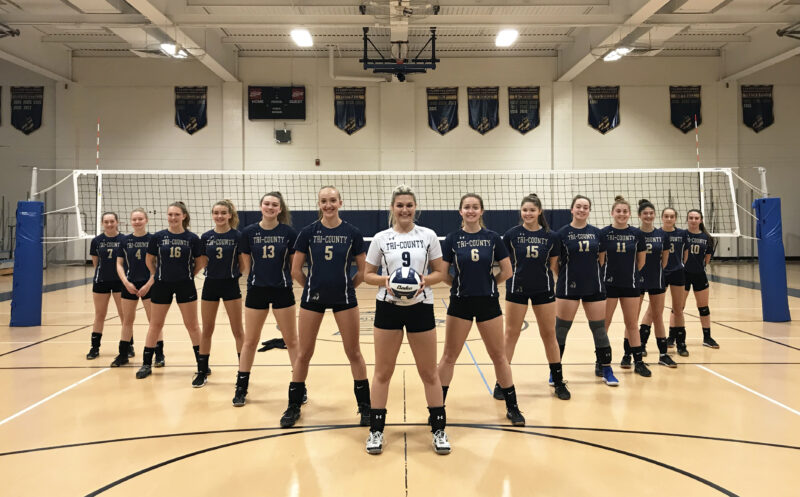 For the fifth time in five years, the Tri-County Regional Vocational Technical High School varsity volleyball team are the Mayflower League Champions.  The Cougars remain undefeated in their regular season with a record of 16-0 with four games remaining.

This year the team is comprised of seven seniors. Sarah Killoy of Franklin, is one of the team’s four captains and third-year starting setter. Carolyn MacPherson of North Attleboro is a team captain and a third-year starter playing outside hitter. MacPherson is also a 2-year Mayflower League All Star and Sun Chronicle All Star. Elizabeth Naff of Franklin is a third-year starting middle, Mayflower League All Star, and team captain. Ashely Barry from North Attleboro is a two-year outside hitter.  Emma Mangiacotti of Norfolk has transitioned into the libero position. Sabrina Howarth of Seekonk is a utility player, who sees most time at middle and right side hitter. Finally, Emily Jutras of Wrentham is one of three players vying for the starting middle position.

Other players fighting for the starting middle position include junior, Jitarra Ellis of Franklin, and sophomore Camden Schweitzer of Wrentham.

Varsity coach, Stephanie Caffrey, has been coaching at Tri-County for the past 8 years. “We work hard every single day to earn every point in a match”, said Caffrey. “Our girls are all self-motivated to accomplish big goals in the post-season and I look forward to what’s to come.”

All fifteen members of the Cougars are strong academic and vocational students. The team participates in many bonding events such as team breakfasts, lunches and dinners. They also travel to area colleges to see former players play on their respective college volleyball teams. Post-season, all members play in the Mass Premier Club Volleyball summer league. In the summer, the team take part in Coach Caffrey’s “Butts & Guts” classes made for all Cougar athletes.

“All teams here at Tri-County support each other and focus on attending as many sporting events as possible”, said Caffrey. “We’re all about TC Pride for our school and love to see all the accomplishments and successes every student brings to our Athletic program.”