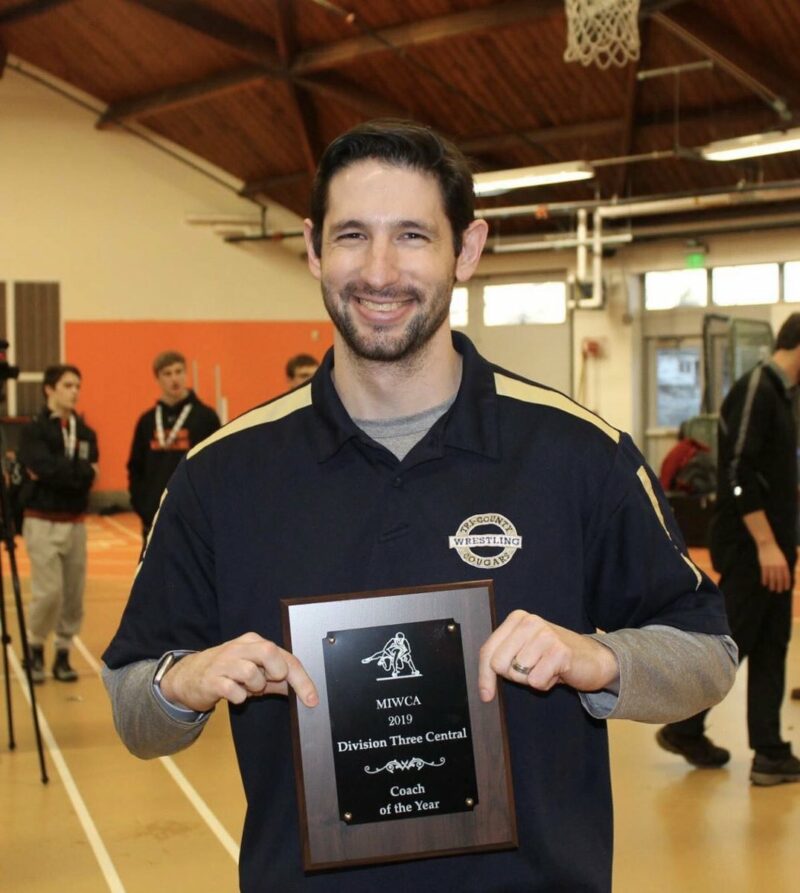 It’s been quite the wrestling season for Tri-County Coach Steven LaPlante.  Not only did the Tri-County Wrestling team win its first ever sectional title, but Coach LaPlante has been named the Massachusetts Interscholastic Wrestling Coaches Association (MIWCA) Division 3 Central Coach of the Year.

During this 2018-2019 wrestling season, Coach LaPlante also earned his 200thdual meet victory.  “The accomplishment is representative of our program and the consistency we have built and sustained over time,” said Coach LaPlante.  “The credit really goes to my assistant coaches and all the wrestlers who have worked together and competed so fiercely for the betterment of our team. Every year we strive to get better.”

“I think I have some of the best assistant coaches in the state,” says Coach LaPlante.  Assistant coach, Drew Stowik, has been coaching with LaPlante from the beginning and Matt Hogan, an elite former Tri-County wrestler, has been coaching for the past 8 years.  “Drew and Matt are a huge reason so many of our guys improve so much during their time wrestling for us,” said LaPlante.

This year, the team’s regular season record is 19-1 and they have claimed 5 tournament championships along with the Mayflower League title.  The team also won the Small Division State Vocational Championship.  “This team is arguably one of the most successful in the history of our program,” declared LaPlante. “The wrestlers’ willingness to personally invest in the program and work hard every day has driven our success.” Senior Captain, Kevin Carlucci of Franklin has enjoyed the benefits of the daily grind. This season, Carlucci broke the school’s career wins record. He will enter into D3 States with 140 career victories under his belt. Senior Captain, Harley Blanchette of Attleboro also reached a milestone this season, eclipsing 100 career victories back in December. Patrick Griffin, a Junior Captain of Franklin, has also put together a stellar season, by putting up a 39-4 record, and earning a sectional championship at 132 lbs.  Dominic Parrella, a Senior Captain of Medway, joined his co-captains by claiming an individual state vocational championship at 220 lbs.

Coach LaPlante started out wrestling for Cumberland High School, under Hall of Fame Coach Steve Gordon. During his wrestling career, LaPlante was a 2-time state finalist and 3-time New England qualifier. He placed 4thin New England as a senior. His love of the sport led him to start coaching in 2005 and he has been coaching ever since.

In LaPlante’s first 3 years of coaching at Tri-County, the victories did not come easily. The team compiled an overall record of 20-34.  Since 2008, however, the wrestling team has put together a dominant record of 195-30. During that time, the Cougars have accumulated a league record of 69-4, won 15 tournament titles, and claimed 8 Mayflower League Championships along the way.

Despite the Cougars’ aggressive, hard-nosed style of wrestling, LaPlante’s coaching style is driven more by caring and compassion. LaPlante emphasizes his coaching staff prioritizes each wrestlers’ personal development over wins. Above all, wrestling builds character, and LaPlante stresses that subscribing to this philosophy leads to greater success on and off the mat. When students sign up to be a part of Tri-County wrestling, they know they’re not just signing up to be a member of the team, but rather to become a part of a family that will make sacrifices for, and rely on, each other.  “It’s larger than just being a member of a team,” added LaPlante. “It’s about being part of something greater than yourself.”

LaPlante further states, “There are many contributing factors to this season’s success. We’ve been fueled by dedicated wrestlers, meticulous team managers, a passionate coaching staff, and truly supportive families-especially my own.”

Coach LaPlante and the Tri-County Cougars are looking forward to divisional states this weekend in Wakefield, MA.